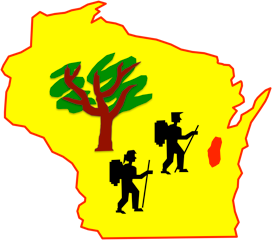 Badger Trails, Inc. is a non-profit organization dedicated to promoting hiking historic trails in Wisconsin. Our members are volunteers who enjoy hiking, camping, and the outdoors, and have a desire to promote and share these experiences with today's youth. We run three events per year for Boy Scouts, Girl Scouts, Youth Groups and the general public. We have hiking, backpacking and camping events to fit everyone's skill set.

In the fall of 1960, a group of ten volunteer Boy Scout leaders met with the purpose of studying the possibilities of establishing an historic trail in the Milwaukee area.  As a result of some research on the progress of similar programs in the states of Illinois, Indiana, and Ohio, additional meetings were held. It was decided that this group would incorporate into an organization for the purpose of assisting in the development and maintenance of public hiking trails, and to foster the education of the public, especially young people, in the beauties and wonders of nature.

As a result, Badger Trails, Inc. was incorporated and became effective June 22, 1961.  Mr. Erwin E. Shambeau was elected the first President of the organization.

After that success, the members of Badger Trails decided to work with the Wisconsin Conservation Commission to promote another trail in Devil's Lake State Park in the Baraboo range of central Wisconsin. The rock outcroppings with the park are some of the oldest exposed rocks in the United States and the area sits is on the terminal edge of the Wisconsin Glacier which enclosed two 400 foot gorges to form the beautiful Devil's Lake. Within the park are evidence of long abandoned villages and numerous effigy mounds.  All of these were used in the program of education on the 14-mile trail.  Following the implementation plan of the Glacial Trail, the Devil's Lake Trail was hiked initially by many groups independently, but on October 19, 1963, Badger Trails hosted a "Grand Opening" of the trail with 1,200 hikers in attendance.

Over the years, the members of Badger Trails worked with various governmental agencies to expand the public trails in Wisconsin and Badger Trails, Inc. continues to host yearly hikes on both Glacial Trail and the Devil's Lake Trail and, in 1999, took over a Root River Trail event held each Spring when the volunteer group running it could no longer sustain membership.

In 2020 Badger Trails discontinued the Root River Trail event due to declining participation and the logistics of running the event.

Badger Trails is a wholly volunteer organization that is run by a dedicated group of Officers, Directors, and countless volunteers. The following is a list of the current Officers and Directors:

We are aided by dozens of additional volunteers which helps ensure the success of our events.

Our events are open to the general public and we see as many as 5,000 people attend our hiking events annually.